We offer custom VR/ AR/ MR solutions to your needs and Industry. Our AR/VR services deliver the best In class user experience.

There's no denying that humans have come ever close to defy the boundaries between the virtual and real world. The technology that frequently embraced the people through sci-fi movies has certainly engraved its foot on the modern ground. This has been possible due to the advancements in Virtual Reality (VR), Augmented Reality (AR) and Mixed Reality (MR) technologies.

Virtual Reality is a computer-simulated environment where humans can interact with the seemingly three-dimensional virtual objects through the use of digital devices such as screen, helmet and gloves.

On the contrary, Augmented Reality deals with the alteration and enhancement of virtual objects in the real world through computer-generated input.

Mixed Reality further complicates the definition of the above two by combining the virtual and digital environment to produce entirely distinctive visualizations where humans and digital objects can co-exist.

While the debate on the 'what is VR' and 'what is MR' is still afresh, there's a need to dig deeper concerning the association about these technologies and how they can pave the way for enhanced functionalities. 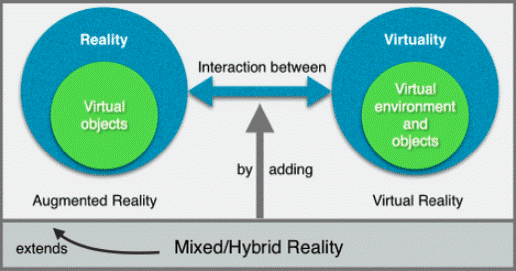 How AR/VR & MR Solutions will benefit your business

Augmented Reality, in particular, has been significant in defining the new business realms, especially the one that concerns GPS application. People have had accidents following the GPS too accurately; however, it won't happen again as GPS application has been entirely enveloped by Augmented Reality that allows for a virtual overlay to live-cameras in real-time (Hinchliffe, Tutu, Zoland, Rabbitte, Sachdev, & Guia, 2017).

Follow the points to know more about what Reality technologies have to offer for your business.

Future-oriented enterprises are always on the prowl to leverage the technologies, which will boom the businesses in the forthcoming days. Your business can be one of those elites of tomorrow if you develop your products and services using Virtual, Mixed and Augmented Reality.

Prototyping can be a daunting task when the applications are complex. To make things worse, it is essential. Nevertheless, Virtual and Augmented Reality can simplify and support the prototyping process, saving time as well as cost.

Besides, Virtual Reality is highly beneficial for engineers and designers. Mark Miles, MD of Virtual Reality agency RenderMedia, says that Virtual Reality makes it possible for manufacturers and engineers to experience their products even before they're built. They have developed mobile applications that allow people in different countries to appear next to one another on an oil rig and interact. It creates that heightened sense of reality (Waugh, 2017).

Collaborate with us for MR, AR/VR Services & Solutions

For all that it encompasses, there's always a correct and a not-so-correct method for utilising the AR/VR technologies. This is precisely why MedRec Technologies ensures appropriate AR/VR software development pertaining to your business' domain.

Experts at MedRec Technologies are committed to rendering gimmick-free and valuable AR/VR apps which can intrigue the customers. Our strategies, needless to say, are designed according to your defined objectives, possibilities and limitations. That said, we emphasise the development of your brand by enriching the AR/VR softwares with technologies that are fun.

Most importantly, the group of experienced experts at your service have witnessed the transition of Virtual and Augmented Reality technologies through the years, something that empowers them to align your brand with the technological revolution.